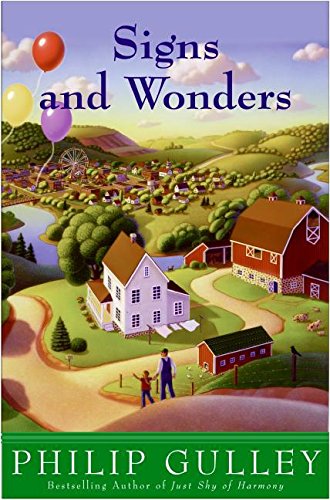 SIGNS AND WONDERS: A Harmony Novel

In his third full-length Harmony novel, Gulley delivers another series of charming vignettes about Quaker pastor Sam Gardner and his eccentric parishioners. In fact, Gulley's underlying thesis seems to be that to live in a small Midwestern town is to be eccentric, as evidenced by such bizarre schemes as Harvey Muldock's attempt to store his beloved convertible in his garage attic, only to have it crash down on top of his wife's car. At its best, Gulley's work is comparable to Gail Godwin's fiction, Garrison Keillor's storytelling and Christopher Guest's filmmaking. When, for example, an obnoxiously pietistic member of the church releases "salvation balloons" in an attempt to save all those Democrats in Chicago, he gets an angry call from a zookeeper in Pittsburgh who reports that the first recipient of one of his balloons was a rare trumpeter swan, who choked on the balloon and died. These moments of sharp wit are interwoven with gentler, more homespun humor in a league with Jan Karon's Mitford series, exemplified in a plot revolving around the only single, attractive, well-educated woman in town and her vain attempts to find love. Sometimes Gulley indulges in hyperbole that reflects just a bit of condescension toward his smalltown characters; for example, he describes Italian night at the local cafe as "Chef Boyardee spaghetti from a can and Bea Majors on the organ." His caricatures of conservative Christians occasionally seem a bit mean-spirited as well. Still, readers who seek pleasant, witty and occasionally poignant fiction will delight in this book.

If Grace Is True: Why God Will Save Every Person