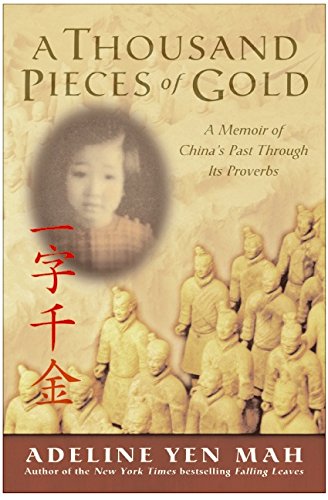 A THOUSAND PIECES OF GOLD: My Discovery of China's Character in Its Proverbs

As she related in her memoir, , Chinese-born writer Yen Mah has earned her sense of victimhood. She was resented and punished by her family for the death of her mother during childbirth. With the deaths of her brutal father and stepmother, Yen Mah ended her quest for filial love. Though this new work discusses events and themes similar to those of , it is largely free of the mawkish notions of what family life should be like that burdened that work. This leaves the current book with more room for what many readers will find more enlightening: the history and use of Chinese proverbs, which she traces to their origin in the ancient writings of Sima Qian, China's venerable historian and chronicler of the great power struggles that crippled the Middle Kingdom's first dynasty 2,200 years ago. Yen Mah recalls points in her life where Sima's poignant proverbs resonate. Descriptions of the early emperors' extravagance and sadism are both repulsive and captivating, and make for sometimes interesting comparisons with the battles fought by Yen Mah in her privileged but cruel home. More often, though, the disparity between the tyranny imposed upon the Chinese peasantry and the disloyalty and neglect endured by the author tends toward self-pity. Many of the digressions into Yen Mah's personal history relate her childhood relationship with her estranged elder brother, who has not spoken to her since her first memoir was published. These passages make the book read at times like a desperate letter the author should have written to him.