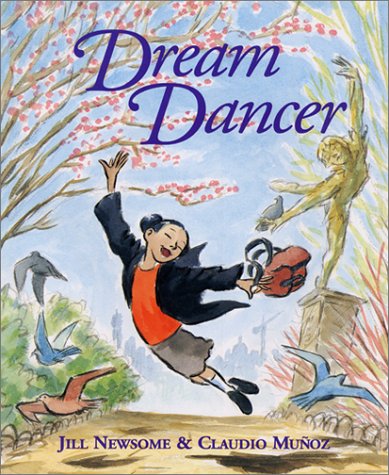 This husband-and-wife team's () second collaboration spotlights a girl who lives for ballet. Lily pirouettes and pliés her way through her waking hours and dances in her dreams as well—a lighthearted sequence shows her jeté-ing out of a circus tent, followed by a similarly lightfooted elephant, lion and fox. After she falls from a tree and breaks her leg, Lily is despondent—until Grandma buys her a small ballerina doll. The author/artist team leaves it to readers to decide whether it's magic or Lily's own imagination that prompts the doll (whom Lily names Peggy) to dance its way through Lily's recuperation. Peggy lifts the girl's spirits and eases the transition back to dance class. The story will quickly win over any child who loves dolls or dance. Newsome subtly explores the theme of perseverance ("After days and days and weeks and months and nearly a year, the moment came at last when Lily could dance again") as Muñoz's spare, eloquent watercolors chronicle Lily's hard work and physical therapy. He captures the graceful arch of an arm and extension of a leg, as well as the emotional underpinnings of the story, and uses lily flowers as an effective recurrent visual motif. Readers will root for Lily right through to her final bravura performance. Ages 4-8.