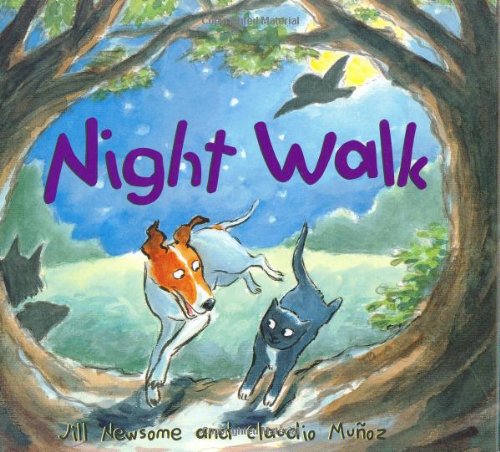 Husband-and-wife team Newsome and Muñoz () trot out a frisky if familiar tale of a homebody cat who ventures outside with her more daring canine companion. Opening at daybreak, the text and visuals quickly establish the contrast between the animals: "Daisy rushes wildly upstairs" (the first of two vignettes shows the dog bounding up the steps; in the second, she hops upon her master's bed to wake him) and "Flute just stretches and yawns" (a single illustration shows the languid cat). The plot follows standard outlines as Flute summons the courage to follow Daisy to the park one night and ends up rescuing her from a ferocious creature. The art, relayed in full-page illustrations as well as vignettes, consistently extends the text's inherent humor. Muñoz demonstrates an almost cinematic ability to advance the story line, and his pet protagonists exhibit an Oscar-worthy range of expressions. In one scene, for example, a group of menacing cats perched in a tree look down at the cowering Flute; in the facing illustration, in which Daisy frightens the others away, Flute poses nonchalantly in the center, licking her paw with a butter-wouldn't-melt-in-her-mouth demureness. A pleasing interpretation of a tried-and-true theme. Ages 4-8.