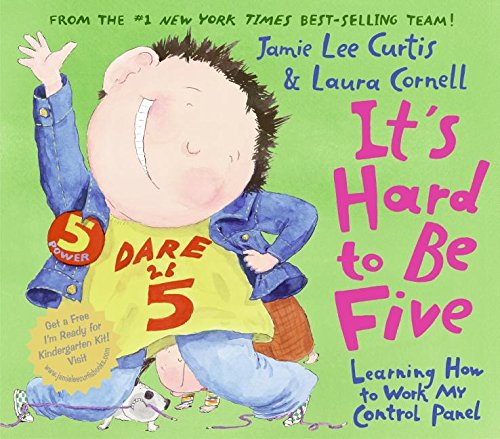 IT'S HARD TO BE FIVE: Learning How to Work My Control Panel

The creative team behind amiably addresses the challenges of being a five-year-old—especially the pesky problem of learning self-control. In the story's wry opening, the narrator observes, "It's hard to be five. I'm little no more. Good old days are gone. 'Bye one, two, three, four." Among the trials he faces are controlling his temper when dealing with his younger brother ("My mind says do one thing, my mouth says another"), avoiding dirt and starting school ("School seems so scary. School seems so strange. I'm only five. My whole world's going to change"). Curtis's singsong verse also focuses on some of the pluses of being five: though his brother is strapped into a stroller, the hero can walk by himself ("It's fun to be five! Big changes are here! My body's my car, and I'm licensed to steer") and school entails some entertaining activities ("At five I'm a worker—a bee among bees. I build things and grow things, say thank you and please"). Cornell's buoyant, teeming spreads and spot illustrations convey the boundless energy and changeable moods of this likeable five-year-old with on-target, hyperbolic humor. Though the narrative winds to a rather corny close, this cheerful book with its clever visual details will surely appeal to fans of the collaborators' earlier books as well as those looking for a reassuring, age-appropriate tale for the kindergartner in their lives. Ages 4-8.