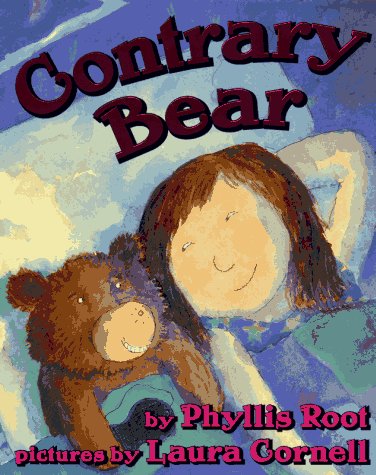 The toy who plays stand-in for a mischievous child is certainly not a new idea, but, infused with Cornell's and Root's (Ant Nancy and Old Man Trouble, reviewed below) knowing wit, it becomes fresh all over again. A girl and her stuffed bear ""do everything together,"" she earnestly informs the reader, but, ""Bear doesn't always do what he's supposed to do."" Thus, it is Contrary Bear who throws sand, makes train whistle noises during naptime, demands a bigger piece of cake and, finally, floods the bathroom with splashes. Dad, the book's authority figure, handles Contrary Bear firmly and patiently (""This train will have to be quiet,"" he warns the naptime revelers), until, pushed to the brink by the bathroom incident, he banishes the soggy Contrary Bear to the clothesline. All is forgiven, however, when the toy's owner promises to make Contrary Bear ""try harder to be good tomorrow."" Root's deadpan (and dead-on) text gets just the right comedic fillip from Cornell (When I Was Little), who combines a cartoonist's satiric sensibility with the virtuosity of a master watercolorist. Contrary Bear seems every bit as alive as his human counterparts, often sporting a toothy grimace of unbridled--and very recognizable--childish fury. Adults and older children will also appreciate the puckish details, like the goofily named beauty products on the bathroom window sill. A guaranteed giggle for children and parents, with a title that's certain to become a catchphrase in any household with occasionally intractable offspring. Ages 3-6. (May)
close
Details