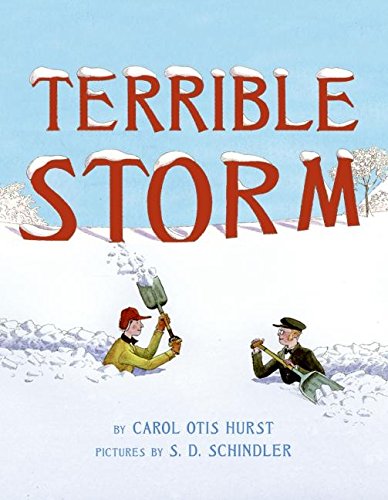 Hurst, having recounted the experience of her rock-collecting father in , now turns to a tale of her two grandfathers set in Westfield, Mass., during the blizzard of 1888. Although friends from boyhood, the two men could not have been more different: "Grandpa Otis (Walt) loved to be around people.... Grandpa Clark (Fred) was a bit shy." Schindler ( ) pictures young Walt exuberantly singing around a piano with friends, while Fred constructs a birdhouse in the company of his three cats. The blizzard proves to be a double trick of nature: it not only shuts down the town for three days, but also forces the two young men to become living examples of the old adage, "One man's meat is another man's poison." Extroverted Walt is marooned in a barn, with only farm animals for company ("Thought I'd go crazy," he recalls), while retiring Fred must take refuge in an inn full of fun-loving folk ("An awful time," he recollects). At long last, the snow stops, the town digs out, and each man returns to doing what he likes best. Schindler's meticulously inked drawings take readers back to a bygone era and visually echo Hurst's clipped Yankee cadences. But the artist's real stroke of genius comes in the parallel panel illustrations. He splits the spreads horizontally, allowing readers to follow the two heroes' comic plights simultaneously. Even very young children will be tickled by the irony of it all. Ages 5-8.