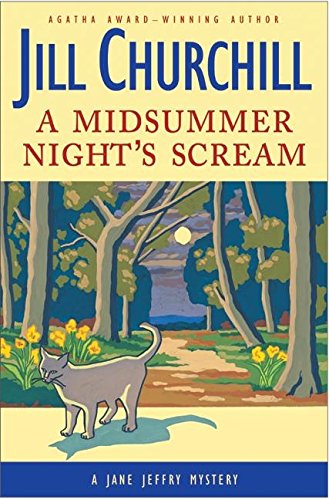 Single mom and amateur sleuth Jane Jeffry unmasks a bad actor in Churchill's entertaining 15th punningly titled cozy ( ; ). The Chicago-area snoop joins friend Shelley Nowack in checking out caterers to feed the volunteers working at the theater that Shelley and her husband have recently bought. The current play is suffering from writer/director Steven Imry's poorly written script and off-putting manner, while the cast of mixed students and professionals, led by veteran stage actors John and Gloria Bunting, isn't much help. Jane and Shelley connect with the genial Gloria, who enthusiastically joins their needlepoint class. The other actors are mostly ciphers, until the violent death of one brings Jane's police boyfriend, Mel VanDyne, onto the scene. For the first time, Jane finds that Mel is actually seeking her insights, since the theater crowd is unknown to him and Jane and Shelley have met them all. Churchill has her formula down pat, mixing a more than serviceable plot with a nice combination of romance, domesticity and sleuthing. Lessons in needlepoint lore and technique and in catering dos-and-don'ts add interest.

It Had to Be You