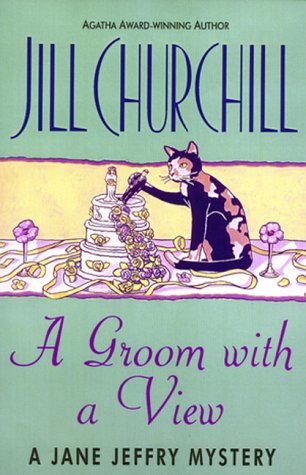 A Groom with a View: A Jane Jeffry Mystery

In her 11th Jane Jeffry mystery (after The Merchant of Menace, 1998), Agatha Award-winner Churchill delivers another charming, if somewhat predictable, cozy. Looking to earn some extra money because her car is always having problems, widowed mom Jane takes on a job as wedding consultant to Livvy Thatcher, a young businesswoman. Jane then enlists her best friend and neighbor, Shelley Nowack, to help her. The wedding is to be held at an old family hunting lodge that was once a monastery, and it proves to be a somewhat spooky venue for the nuptials. After Jane and Shelley arrive at the lodge, the eccentric cast of characters (and eventual murder suspects) begins to gather: a mysterious, laconic caretaker whom Livvy calls ""Uncle Joe""; Mrs. Crossthwait, a cranky, elderly seamstress; three bridesmaids; a caterer; and a florist named Larkspur, not to mention Livvy's elderly aunts. Add the bride and her father, an arrogant captain of industry, and the groom, his mother and brother, and the stage is well set for shenanigans. Larkspur tells Jane the story of a hidden family treasure, and later it is Larkspur who discovers Mrs. Crossthwait dead at the foot of the stairs. Did she fall, or was she pushed? To find out, Jane enlists the aid of her lover, Chicago cop Mel Van Dyne, who comes along to help the local police. Another murder puts a definite damper on the postwedding festivities, and soon after Jane and Shelley winkle out the solution. Though the identity of the killer will come as no great surprise, Churchill delivers a satisfying plot laced with subtle humor and some enjoyable gothic flourishes. (Oct.)
close
Details