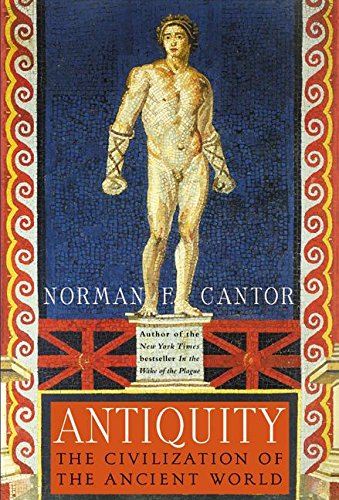 ANTIQUITY: The Civilization of the Ancient World

An NYU emeritus professor of history, sociology and comparative literature, Cantor does for antiquity what he did for medieval times in his acclaimed . With his characteristic eloquence and lucid insights, he offers a majestic introductory survey of the major empires of the ancient world, divided into two parts. The first provides a basic narrative of Hellenistic culture, the Roman Empire and Christianity. In clear prose, Cantor outlines the development of each of those cultures without many details about the evolution of each society. In the second part, he offers a more detailed exploration of the development of each of these ancient cultures, as well as ancient Judaism and Egypt. For example, in his chapter on Rome, Cantor discusses in detail the rise of jurisprudence and the Roman emphasis on civil society that can be traced to Cicero and Caesar. Cantor offers some wonderfully rich characterizations of ancient Greek philosophers: Socrates was a "hippie stonecutter who expounded on philosophy in the Athenian marketplace, perhaps to avoid going home to face his shrewish wife"; Plato was "part of a fast crowd of rich young men"; his Academy was the first talk show. Although Cantor makes a few missteps—the Gnostics are not also called the Manichees, though the latter might have practiced Gnosticism—Cantor offers a splendid and accessible portrait of the cultures of the ancient world. Maps not seen by