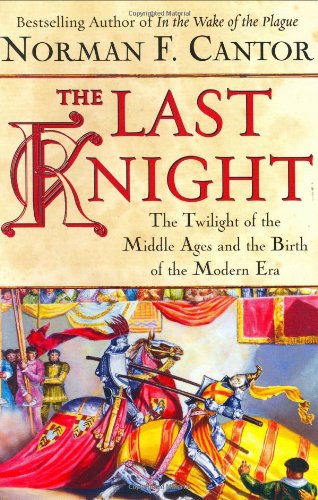 THE LAST KNIGHT: The Twilight of the Middle Ages and the Birth of the Modern Era

John of Gaunt (1340–1399) was one of the wealthiest men of late–14th-century Europe and an exemplar of the rough and refined values of his class. He fought in the Hundred Years War, was targeted in the 1381 Peasants' Rebellion and was a patron of Chaucer. By his first wife, he became Duke of Lancaster and founded the Lancastrian branch of the English royal family; by his second, he had a claim to the throne of Castile; and by his third, he founded another family line that married back into the royal Tudors. Cantor ( ), a widely read authority on medieval Europe, traces these connections and demonstrates how several strands of European history cross through Gaunt. Thoroughly dismissing Annales emphasis on the continuity of peasant life, he argues that it is aristocratic life that has remained unchanged. In modern terms, Gaunt was a multibillionaire with free rein to live his life as he pleased, whether bullying members of Parliament, marrying his mistress or dabbling in the heretical teachings of John Wycliffe. This provocative argument is undermined by simplistic writing and the making of points by assertion rather than proof or argument. A remarkably anachronistic imagined defense of slavery is put into the mouth of Henry the Navigator (Gaunt's grandson), the Portuguese patron of exploration, and stretches the limits of what might be considered Gaunt's heritage. Assumptions about personal motivations based on fragmentary evidence are not sufficient to validate the intimate portrait Cantor claims to present.