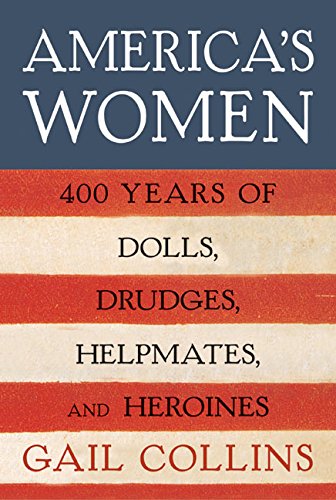 The basis of the struggle of American women, postulates Collins (), "is the tension between the yearning to create a home and the urge to get out of it." Today's issues—should women be in the fields, on the factory lines and in offices, or should they be at home, tending to hearth and family?—are centuries old, and Collins, editor of the 's editorial page, not only expertly chronicles what women have done since arriving in the New World, but how they did it and why. Creating a compelling social history, Collins discovers "it's less a war against oppressive men than a struggle to straighten out the perpetually mixed message about women's role that was accepted by almost everybody of both genders." These confusing messages are repeated over 400 years and are typified in the 1847 lecture of one doctor who stated that women's heads are "almost too small for intellect and just big enough for love" (ironically, around this time Elizabeth Blackwell became the first woman to graduate from an American medical school). The narratives are rich with direct quotes from both celebrated and common women, creating a clear picture of life in the 16th through 20th centuries, covering everyday (menstruation, birth control, cooking, cleanliness) and extraordinary (life during war, the abolition movement, fighting for the right to vote) topics. Beginning with Eleanor Dare and her 1587 sail to the colonies and ending with the 1970s, Collins's work is a fully accessible, and thoroughly enjoyable, primer of how American women have not only survived but thrived. Photos not seen by .