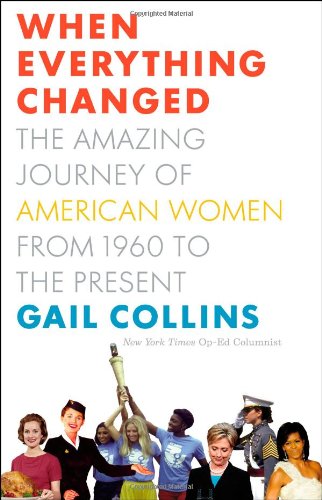 When Everything Changed: The Amazing Journey of American Women from 1960 to the Present

You've come a long way, baby: that's Collins's conclusion about American women, who once lacked the right to publicly wear pants and now take their place on the presidential campaign trail and the battlefield. columnist Collins attempts a comprehensive account of the last 50 years of women's history in this sequel to primarily focusing on the 1960s. Giving relatively short shrift to the current generation of young women, Collins centers the bulk of her attention on the baby boom generation (to which she belongs) and leaders like NOW founder Betty Friedan and Gloria Steinem, as well as dozens of ordinary struggling women. The book's stronger parts include highlighting pioneers like Congresswoman Martha Griffiths, who began her political career in the 1940s and stories of laughably shortsighted sexism against Sandra Day O'Connor. Collins captures the conundrums of feminism's success (does a see-through blouse make a woman liberated or a sex object?), but the book will probably resonate most for her generational peers. 16 pages of b&w photographs.