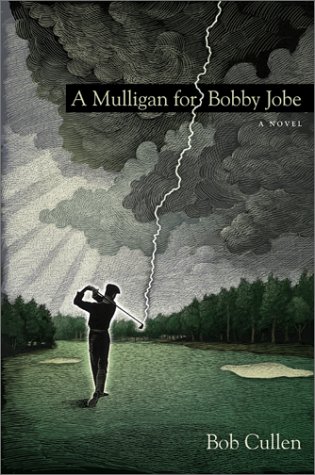 A MULLIGAN FOR BOBBY JOBE

Few sports inspire more preposterous fictional premises than golf, and the one that drives Cullen's first golf novel is a real beauty. Bobby Jobe is an arrogant pro golfer who fights with his caddy, chokes down the stretch in the PGA championship, then gets blinded by a bolt of lightning while hitting practice balls in a thunderstorm after the tournament. Caddy and narrator Henry Mote storms off the course thinking his career is over, only to be reunited with Jobe by the golfer's sexy rehab therapist, Angela Murphy, who convinces the pair that Jobe can make a comeback using Mote as his eyes. Their initial efforts are a comedy of errors, but Jobe eventually improves enough to enter an obscure tournament where he plays well before his personality gets the best of him. Mote returns to the family golf course and homestead in the Allegheny mountains, which he struggles to save from ruin until the relentless Murphy engineers another reunion with Jobe, who completes his comeback in the PGA championship at a treacherous course in Atlantic City. Cullen, a former correspondent who has written four thrillers and coauthored several books on golf, including , has a fine ear for dialogue and a knack for writing wise, warm scenes—although the treacle quotient of several sections is high. His knowledge of golf is vast, and he handles the romantic subplot between Murphy and Mote well. The result is a winning story that pulls all the right heartstrings in a genre where tall tales abound.