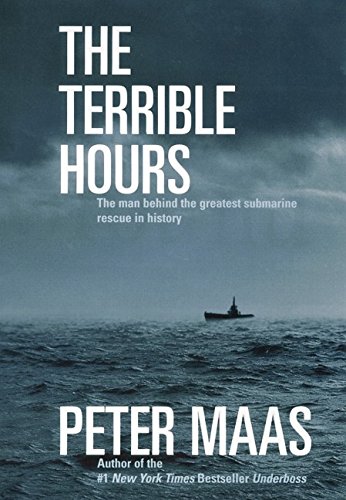 The Terrible Hours: The Man Behind the Greatest Submarine Rescue in History

Maas, best known for his chronicling of the urban underworld (Underboss, Serpico, etc.), takes readers underwater for a thrilling account of the world's first rescue of a submarine. Before WWII, submariners were second-class citizens. Worse, until Charles ""Swede"" Momsen came along, it was standard procedure to treat downed subs as irretrievable. Fortunately for 33 men aboard the Squalus, Momsen had developed and tested pioneering rescue equipment (often at the risk of his own life) and was ready with his crew when the sub sank to a depth of 243 feet off Portsmouth, N.H., on May 23, 1939. While the captain of the Squalus kept the air slightly toxic so that his crew stayed drowsy and therefore docile, Momsen lowered his huge pear-shaped diving bell until it made contact with the sub's deck, then began to bring the men up in groups. Bad weather threatened, and then, on the last ascent, the cable tangled, and the final group of men had to be lowered to the ocean floor again and there await repairs. To the amazement of the surface crew, who had telephone contact with the occupants of the bell, they maintained morale by singing ""Old MacDonald Had a Farm."" Unfortunately, 26 men had been drowned in the first few minutes of the sinking, and their bodies were not retrieved until the Squalus was recovered 113 days after the mishap. Maas anchors the gripping story in Momsen, whom he portrays as a larger-than-life hero, a brainy, brave iconoclast of the kind one associates with action movies. It's a white-knuckler of a read--but it's not for the claustrophobic. (Sept.)
close
Details