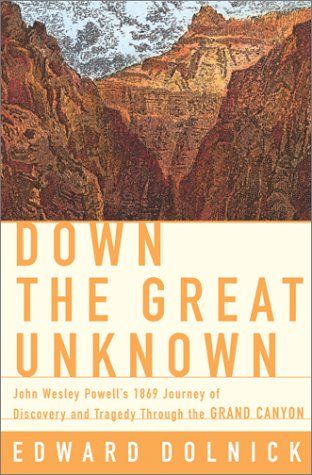 DOWN THE GREAT UNKNOWN: John Wesley Powell's 1869 Journey of Discovery and Tragedy Through the Grand Canyon

Powell led his band of stalwart trappers and ex-soldiers down the Green River in Wyoming Territory, heading for the last bit of terra incognita in the U.S.: the Colorado River and the Grand Canyon. The expedition had plenty of supplies, but the wrong type of boats for shooting rapids. Moreover, their inexperience with rapids cost them one of the boats and many provisions. There was little game to supplement their rapidly dwindling food supply. And being the first to chart the river, they didn't know what lay beyond each twist. These handicaps, along with deadly river rocks, soaring canyon walls and one-armed Powell's impressive feat of scaling them to measure their height, make for a remarkable journey. Unfortunately, Dolnick does the story a disservice in overwriting the expedition's slower moments. He frequently overexplains, and he never meets a simile he doesn't like. Every description, no matter how effective, is carried too far, suggesting Dolnick doesn't trust his story or his readers: "rapids... do not murmur. They rumble. They roar. They crash. The sound evokes a thunderstorm just overhead, a jet skimming the ground, a runaway train.... The message is worse than the sound itself—the roar of a rapid is a proclamation of danger as clear as a giant's bellowed curse in a fairy tale." After passages like that, readers may want to jump ship, or like Powell's band, they can struggle through and emerge battered but illuminated. Photos and illus.