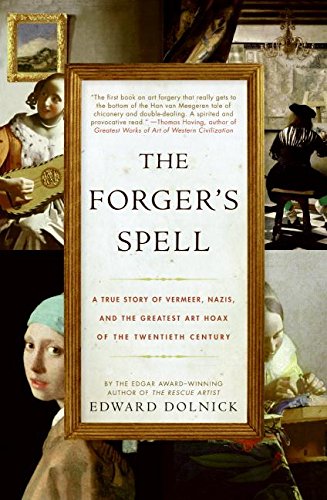 The Forger's Spell: A True Story of Vermeer, Nazis, and the Greatest Art Hoax of the Twentieth Century

Edgar-winner Dolnick ( ) delves into the extraordinary story of Han van Meegeren (1889–1947), who made a fortune in German-occupied Holland by forging paintings of the 17th-century Dutch painter Vermeer. The discovery of a “new” Vermeer was just what the beleaguered Dutch needed to lift their spirits, and van Meegeren's had already been bought by the Boymans Museum in Rotterdam in 1937 for $2.6 million. Collectors, critics and the public were blind to the clumsiness of this work and five other “Vermeers” done by van Meegeren. Dolnick asks how everyone could have been fooled, and he answers with a fascinating analysis of the forger's technique and a perceptive discussion of van Meegeren's genius at manipulating people. Van Meegeren was unmasked in 1945 by one of his clients, Hermann Goering. Later accused of treason for collaboration, he saved himself from execution and even became a hero for having swindled Goering. Dolnick's compelling look at how a forger worked his magic leads to one sad conclusion: there will always be eager victims waiting to be duped. Illus. not seen by .