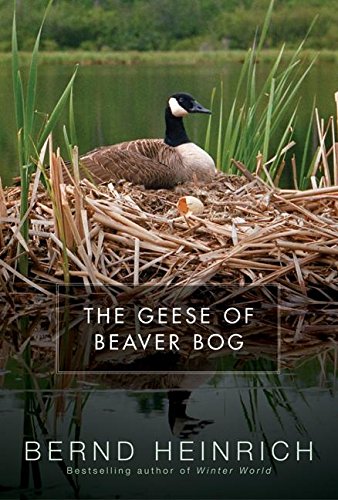 THE GEESE OF BEAVER BOG

Arguably today's finest naturalist author, Heinrich follows up his magnificent (2003) with a smaller-scale but delightful narrative of his recent observations on the Canadian geese that have colonized the beaver bog near his Vermont home. The story begins and ends with Peep, a goose who hatched from an egg on Heinrich's lawn and adopted Heinrich's family as her own. In time Peep mates with a gander, Pop, only to see all her eggs but one destroyed by an unknown predator—Heinrich suspects other geese—and then her sole gosling die, as she and Pop share the bog with another goose couple whom Heinrich calls Jane and Jack. The next year, Pop has coupled with Jane, while Peep, after some struggle, takes up with Jack, contradicting the common wisdom that geese pair off for years, just one of many anomalous behaviors that Heinrich observes and tries to make sense of. Other geese come and go, as Heinrich rushes from his house to the bog, often before dawn, scrupulously studying this incident or that, always tying in what he sees with scientific knowledge, relying particularly on Konrad Lorenz's groundbreaking work. The story can flag at times (these are geese, after all, not higher primates), but is always re-energized by Heinrich's enthusiasm. Other animals figure in as well—other bird species, beavers, mammalian predators and even the author's own family—as the seasons turn and the geese grow, in Heinrich's talented hands, into memorable characters. Backed by several useful appendixes and brightened not only by Heinrich's careful drawings but by color photos (not seen by ), this is another worthy missive from our latter-day Thoreau.