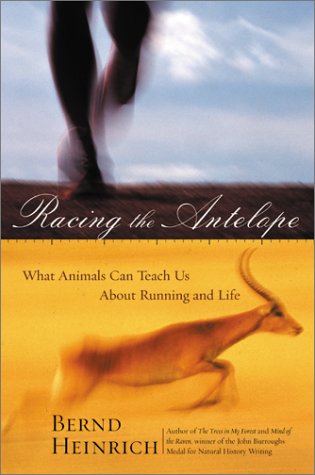 RACING THE ANTELOPE: What Animals Can Teach Us About Running and Life

"Movement is the essence of life," writes biologist Heinrich (; ), a professor at the University of Vermont and winner of Germany's Alexander von Humboldt Senior Scientist Award. Indeed, Heinrich has spent much of his life running. As a young child, he and his family fled from advancing Soviet troops into the deep forest in Germany, where they eked out a living by collecting biological specimens for museums. Moving to Maine at age 10, Heinrich became a star cross-country runner for his high school and for the state university he later attended. He went on to become a marathoner and, at age 41, broke the North American record for Chicago's 100k (62.2 mile) race by 13 minutes (he eventually went on to 100-mile and 24-hour races as well). In this thoroughly engrossing account, Heinrich details his motivation and strategy for the Chicago race, based on what he has learned about animals that move far and fast and the peoples who have hunted them on foot. He explains the functions of bipedalism, muscle fiber types, cellular activity and heat regulation, adding, "It was not just our sweat glands that made us premier endurance predators. It was also our minds." Imagination, he insists, is the "pull that allows us to reach into the future" and the factor that differentiates human from animal racers. "Those hunters who had the longest vision," he writes, "persisted longest on the trail" and became our ancestors. As inspiring as it is fascinating, this book should have wide appeal both within and beyond the athletic world.