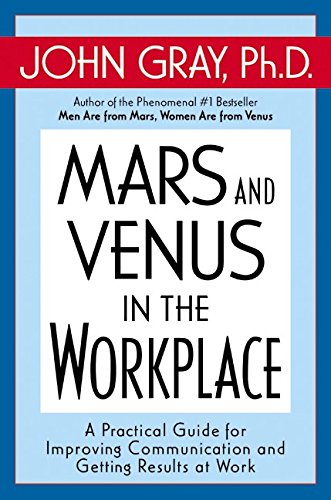 MARS & VENUS IN THE WORKPLACE: A Practical Guide for Improving Communication and Getting Results at Work

Gray made a splash with his bestselling , attributing stereotypical traits to each gender and advising the other how best to respond to or work around these characteristics. Building on that theory, Gray claims that "men and women think, feel, and communicate differently in the workplace," and applies his hypothesis to the business environment. As in his previous books, Gray's writing style is repetitive, bolstering a few simple ideas with plenty of generalizing and gender clichés. While alleging that the traits he assigns to men and women are innate rather than learned or cultural—describing them as driven by "instinct," "basic nature" and "a function of one's level of testosterone"—he offers no proof of this theory, simply assuming that his audience trusts his presumptions. Many of Gray's sweeping statements don't ring true, e.g., his assertions that men don't mind being interrupted while women do, or that women care about relationships, not competence, where they work. Gray does offer some generic, useful advice, such as keeping personal emotions out of the workplace while making sure that one's personal life provides stress relief and opportunities for self-expression. In identifying common personality types and traits, though, Gray might have simply said that some people are Venusians while others are Martians, instead of using tiresome gender stereotypes. While he's unlikely to win new converts with this rehash of his now familiar material, Gray's faithful fans will not be disappointed.