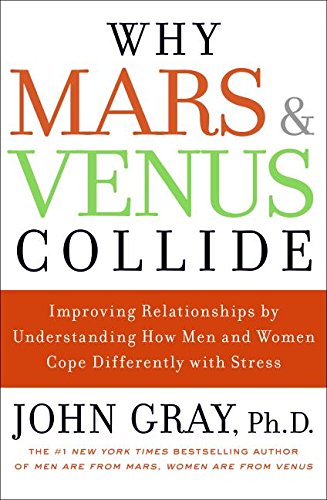 Why Mars and Venus Collide: Improving Relationships by Understanding How Men and Woman Cope Differently with Stress

The author of the wildly successful now posits that men (Mars) and women (Venus) naturally react differently to everyday stress, which in turn causes more stress in their relationships. When Gray says “naturally,” he means hormones. When a man, after a stressful day, wants to veg out in front of the TV, he is not rejecting his wife. Rather, he is replenishing his depleted testosterone. And when a woman wants to talk about her day, she is not being a nag. It's just her way of replenishing her cuddle hormone, oxytocin. According to Gray, the fact that women have more body fat means they burn more energy than men, which makes their minds create endless to-do lists. Gray does not consider cultural differences figuring in the stress mix. If anything, Gray seems to come down hard—or focus more—on women, perhaps because women are his most likely audience. Thus, he discusses “Why Women Never Forget a Quarrel”; and “Making a Man Happier Is Easier than You Think” (in which he uses a devoted dog as an example). It's simplistic but easy to digest and no doubt headed for the bestseller lists.