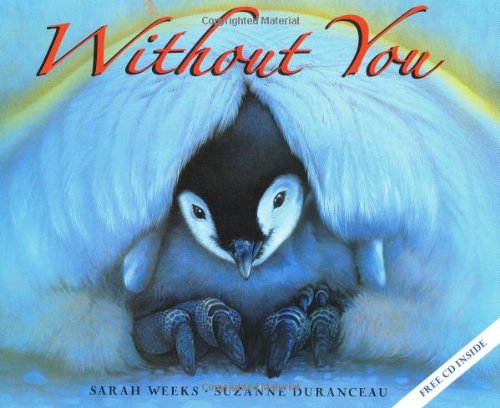 Weeks and Duranceau (previously paired for ) bring readers' attention to one of nature's most dramatic and odd stories. After giving birth, Antarctica's female emperor penguin entrusts the egg to her mate and leaves for a two-month-long underwater feed. Despite the unrelenting darkness and subzero temperatures, the father penguin keeps the egg safe and warm by balancing it on his feet and covering it with his feathery bulk. After a detailed and stirring prose introduction ("Each bird gets his share of protected time in the warmer inner circle as well as on the chilly perimeter, serving as a wind barrier for others"), Weeks launches into sentimental lyrics (also sung on the enclosed CD) in the voice of the egg-turned chick: "I know that she's somewhere out there/ Without us. / But I've got to believe/ She's thinking about us/ .../ Where would I be, / What would I do/ .../ Without you?" If youngsters listen to Weeks's lilting melody—part love song, part lullaby—Duranceau's images take on a cinematic quality. Her artwork, with or without the music, scores in both its artistry and emotional immediacy from the very first spread, which shows the mother penguins diving into the sea as the stars seem to freeze in the sky. Casting icy light over her scenes, the artist plunges readers into the unforgiving, endless winter of the South Pole, while reassuring them that the family will reunite (as they do in a final image). Ages 3-7.