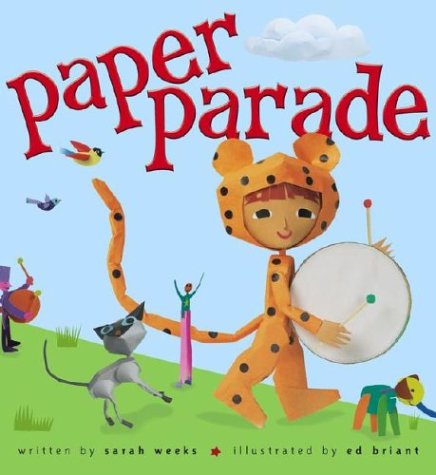 This rhythmic romp, which marches along at a bouncy clip, features meticulous 3-D paper sculptures of an amiable red-headed girl with braids, her mischievous Siamese cat and an assortment of fantasy creatures. Upon hearing a compelling sound, the girl leans out the window of her construction-paper apartment building: "What's that?/ Tickity-tat/ Is it a clock?/ Tickity-tock/ It's a parade!/ Tickity-tum/ With a great big round bass drum./ Ba-rum-pum-pum." Onomatopoeic words keep the beat as she asks her mother whether they can watch: "Let's go!/ Clap-clap/ But ./ Tap-tap/ Baby brother Joe needs a nap, nap, nap." Stuck indoors, the girl heads for her desk and, "snip-snipity-snip," creates paper sculptures while her blue-eyed kitten plays with discarded scraps. As an iridescent moon rises, the artist pictures the girl dreaming that she is dressed as a leopard, heading a "paper parade" of toy animals. Among the attendees are a mermaid, a shiny robot with tubelike arms and an intricately crafted green monkey with a fringed tail. When the girl awakens in a better mood, she turns her paper crafts into a mobile for her younger sibling. The narrative moves at a bright pace, thanks to Weeks's ( ) catchy "tickity" repetition. Meanwhile, the book spotlights the imaginative puppet-like constructions of debut artist Briant, despite uninspired layouts. The full-bleed tableaux here, with their computer-generated pastel backdrops, look strongly two-dimensional. Readers must look closely to see that the characters are articulate, detailed models, rather than software renderings. Briant makes the most of paper, scissors and plot. Ages 3-6.