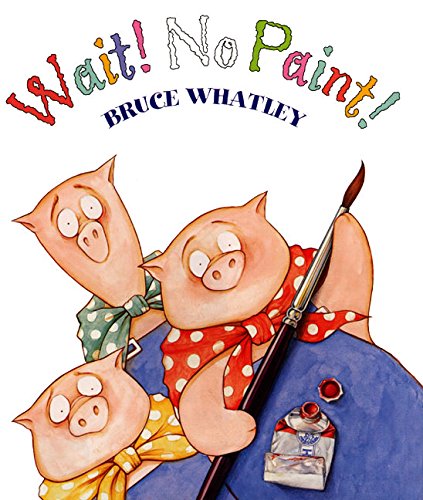 In this cheeky burlesque, the Three Little Pigs tangle with a wolf and an unseen illustrator who is short on art supplies. The tale begins as usual, with the pigs constructing homes of straw, sticks and bricks. "The first little pig had just finished building his house when he heard a splash. 'Oops!' said a Voice from nowhere in particular. 'I spilled my juice.' " An authentic-looking glass and its shiny liquid contents lie across the cartoon image, drenching the white page and two-dimensional straw house. "The house collapse[s] with a wet " before the big bad wolf can blow it down, and the soggy pig scurries to his brother's place. Later, the artist runs out of red paint and whimsically substitutes chartreuse for the pigs' customary rosy tint. The pigs don't find this amusing. Whatley () saddles the book with an unmemorable title that doesn't do justice to his comical trompe l'oeil spreads. Photorealistic paintbrushes, whittled pencils and squeezed-out paint tubes are superimposed on stylized cartoons, and the pigs confront their glib creator eye to eye. All the characters, wolf included, behave like frustrated actors with a maddening director. By interrupting familiar characters with technical concerns, Whatley turns the story into a theater piece in which offstage antics appear front and center. Ages 4-8.