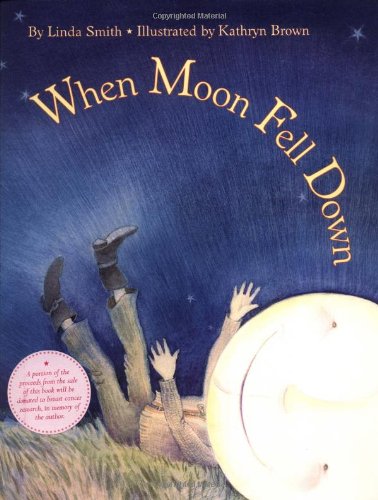 WHEN MOON FELL DOWN

In this episodic fantasy, the moon topples from his perch and lands in a farmer's lawn: "The rye smelled sweet,/ The night winds whirled,/ Circling Moon in a misty wreath,/ And he beamed in awe/ At this wondrous world—/ The stars above and earth/ beneath." Wearing cowboy boots and a zippered sweater on the torso and limbs that support him, Moon meets a cow who accompanies him to town. Moon is entranced by a blinking sign, while Cow "poke[s] around the milkman's cart." Their adventures come to an abrupt halt the next morning, when he orders them back where they belong. The late Smith's rhyme is lilting and soothing, while Brown's watercolors are agreeably inviting. But in their adherence to a uniform perspective, they underserve one of the themes—the pleasure of seeing a familiar object from a new angle. Moon is an eager observer: "He'd never seen the trunks of trees/ Or blades below the farmer's plow./ Moon didn't know a horse had knees,/ But things were strangely sideways now." Reminiscent of both e.e. cummings and "Hey Diddle Diddle," Smith's rhythms and phrasing create a fanciful entertainment for bedtime fun. Ages 4-8.