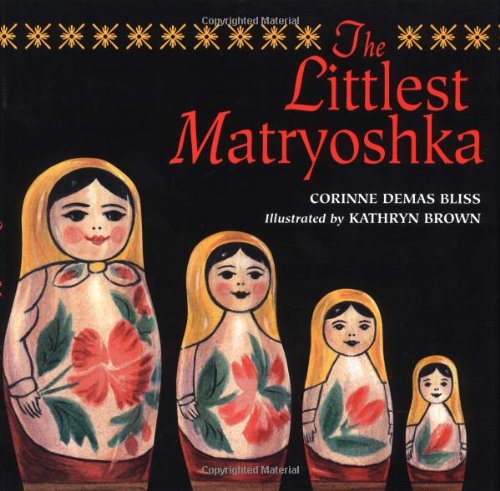 With illustrations quaint enough for Christmas cards, an author's note that explains the history of nesting dolls, and a story reminiscent of The Tin Soldier, Bliss's (Matthew's Meadow) picture book will especially please collectors of Russian matryoshkas. The story begins ""in a small shop in a snowy village in Russia,"" where Nikolai the doll maker, a Geppetto-like wood carver, fashions a set of six nesting dolls. He tells them, ""You are six sisters,"" and names each one. Anna, the largest doll, watches as they travel to America, where they are lined up on a shelf, and the smallest doll, Nina, is accidentally knocked to the floor and kicked outside into the snow. After a plow scoops up Nina and a snow truck dumps her outside of town, the shopkeeper sells the remaining matroyoshkas to a girl, Jessie, for half-price. Nina rides a river of melting snow to a stream, is picked up by a heron, found by a squirrel, tumbles down a rain pipe and is eventually found by Jessie and her cat, who reunite the six sisters. ""How they rejoiced to be together again!"" as ""Anna smiled the smile that had been painted on by Nikolai the doll maker in Russia, so long ago."" Brown's (Tough Boris) paintings are sweetly old-fashioned, the images perceived as if behind a scrim of fantasy. They suit the nostalgic mood of the narrative. What this story lacks in originality, it makes up for in neatness--the elements fit together as cozily as the dolls nesting one inside the other. Ages 4-8. (Sept.)
close
Details