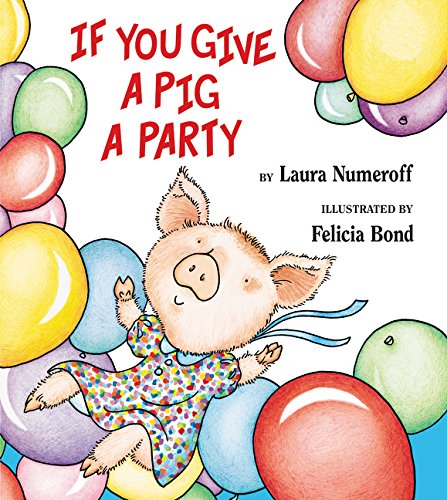 If You Give a Pig a Party

The perennially popular party theme, paired with the playfully persistent porcine star of , ensures that these collaborators' latest addition to the series (which began with ) will be eagerly celebrated by their fans. After decorating the house with balloons and donning her favorite dress, the party gal attempts to phone her friends to invite them to her fête. Since they aren't home, she jumps in a bicycle basket as her accommodating caregiver transports her to search for them. On the way, they come across a street fair, where the energetic pig finds her pals—and enthusiastically enjoys the amusements before they all head home to party. The vision of the girl pedaling her bike with eight animals aboard—including a snake coiled atop her head—will bring on ample giggles, as will the sight of the pajama-clad menagerie (the snake wears a sock) preparing for a sleepover. Bond makes particularly clever use of the spreads when conveying the mayhem of the bumper cars and pillow fight scenes. As in the earlier volumes of this serendipitous series, this caper comes satisfyingly full circle, with the pig asking for a party all over again. Ages 4-8. ( .)