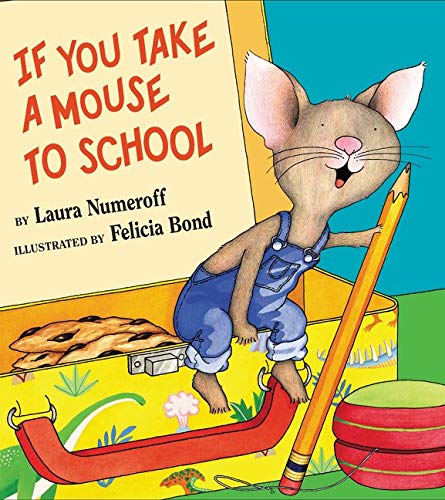 IF YOU TAKE A MOUSE TO SCHOOL

In a rollicking romp, Numeroff and Bond send the energetic, exuberant star of and (and his boy sidekick) into the classroom. After pulling on his overalls, the diminutive character makes his first request ("He'll ask you for your lunchbox") and then demands a snack, notebook and pencils before climbing into the boy's backpack. Once at school, the mercurial mouse happily bounds from one activity to the next: he spells "a word or two" on the blackboard (Bond shows these as an impressive list headed by "onomatopoeia"), conducts a science experiment (purple matter erupts from his beaker), builds "a little mouse house" out of blocks (the edifice looks quite elaborate) and fashions furniture for it with clay. Realizing he needs something on his new bookshelf, the ambitious critter collects paper and pencils and creates his own book, which he then wants to take home, in "your" lunch box. As animated as the whiskered student it depicts, Bond's art lives up to expectation, featuring her customary crisp colors and kid-pleasing details. Its school setting, tried-and-true tone and popular protagonist mark this title as a winner. Ages 3-7. ()