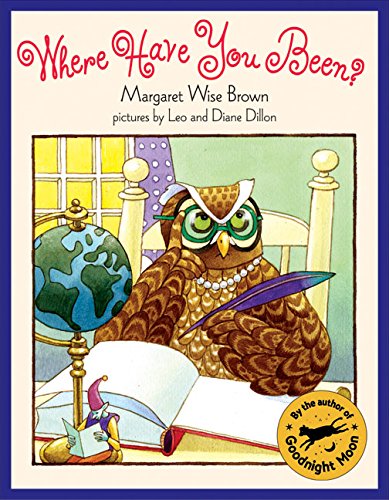 WHERE HAVE YOU BEEN?

Having previously illustrated author Brown's , the Caldecott Medal–winning Dillons update what seems a minor work by the late author (the original 1952 edition was illustrated by Barbara Cooney). A bookish brown owl, wearing green-tinted specs and a strand of pearls, interviews 14 creatures, starting with, "Little Old Cat/ Little Old Cat/ Where have you been?/ To see this and that/ Said the Little Old Cat/ That's where I've been." In a fanciful full-page image opposite the question-and-answer scene, the Cat sits with a slender elf on a personified crescent moon, gazing through a telescope. Each stanza follows the same formula as the owl asks after Brown's favorite animals, including a bird, bunny and mouse. A Little Old Horse has been "in the clover, of course," Little Old Frog "sitting on a log" and Little Old Bee "in a pink apple tree." On each facing page, a larger image suggests the animals' exotic adventures with fairy people; for instance, Little Old Toad drives an antique car (in a possible allusion to ), with a fairy couple riding shotgun. Throughout, the owl jots notes with a purple quill pen, but her journal's pages remain disappointingly blank, and readers don't see any handwriting until she writes "The End" on the back of the book's dust jacket. The Dillons, whose meticulously crafted watercolors here recall Richard Egielski's exacting work, create pleasing but superficial tableaux for Brown's likewise bland, repetitive verses. Ages 3-6.