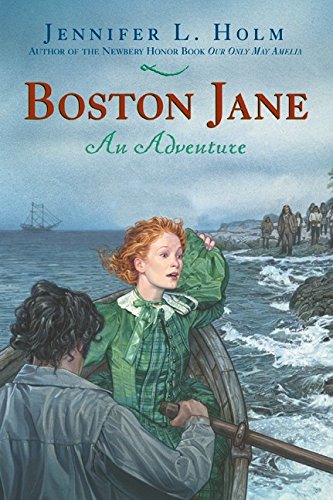 Holm () returns to the frontier (by way of Philadelphia) in this fast-paced second novel about a blossoming society lady who must surrender etiquette in order to survive. The enormously likable and irrepressible 16-year-old narrator Jane recounts her childhood crush on her father's apprentice William, which caused her, at age 11, to trade her tomboyish spitting and cherry pie–eating for proper deportment and embroidery lessons at Miss Hepplewhite's Young Ladies Academy. As Jane makes her way to the Oregon territory to marry William, Holm humorously juxtaposes Miss Hepplewhite's lessons with the reality of life at sea and on the frontier in 1854. Such advice as travelers must "dress plainly and pack lightly" does not seem to apply: Jane reflects, "She had been rather remiss in mentioning any hints on killing fleas, avoiding rats, bathing with seawater, or being seasick." The plot thickens when she meets Jehu, an officer on the ship and discovers that William has departed for a project with the governor. Jane (named Boston Jane by the local Chinook Indians) must share a cabin with unkempt, tobacco-chewing men and make herself useful by cooking, washing and mending rather than supervising servants or pouring tea. The developing love triangle (with Jehu and William) takes a back seat to Holm's credible portrait of Jane's budding friendships with the Chinook and pioneers, and the series of challenges that transform her into the outspoken, self-reliant young woman readers will long remember. Ages 10-up.