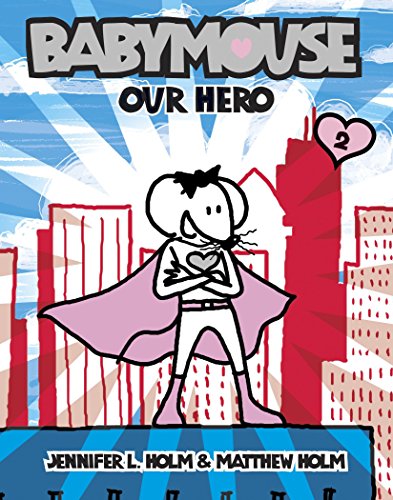 Babymouse: Queen of the World! Babymouse: Our Hero

Jennifer Holm ( ) and her brother Matthew Holm, a graphic designer, make an incursion on territory with these comic books about a girl mouse. Both tales share eye-grabbing black-and-pink graphics, and a perceptible Spiegelman influence simmers in the energetic ink illustrations of the dot-eyed heroine. introduces Babymouse and her nemesis, a popular cat named Felicia Furrypaws. Babymouse desperately wants an invitation to Felicia's slumber party (which she feels could confer "queen" status), although her best friend Wilson the Weasel expects her to watch monster movies with him that night. Fantasy sequences testify to Babymouse's reading habit and active imagination: in one reverie, she's Babymouserella, transformed into a princess by "fairy godweasel" Wilson, but undone by Felicia on the way to the ball ("In 'Cinderella,' the mouse pulls the carriage. Duh!"). A sequel, , centers on a gym class where unathletic Babymouse faces dodgeball whiz Felicia. Before the competition, Babymouse daydreams of boot camp, stomps on her antagonist as "Babymousezilla" and indulges in a Peter Pan sequence where a combined Felicia-Hook makes her walk the plank into the jaws of a crocodile (who doubles as the gym teacher). The Holms make humorous allusions to novels and movies, and interject sympathetic remarks from an offstage narrator. This personable, self-conscious mouse, with her penchant for pink hearts, resembles Kevin Henkes's Lilly, with some extra years of grade-school experience. Ages 7-10.