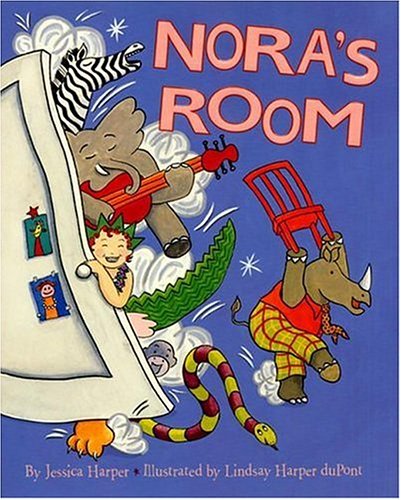 The siblings who previously offered here create a jaunty picture-book adaptation of one of Harper's children's songs. "Crash! Bang! Crash! Bang! Boom! Something's going on in Nora's room!" begins this zippy flight of imagination. While Mom tends to two younger siblings, strange—and very loud—sounds emanate from behind Nora's bedroom door in a rollicking verse. All the while, Mom, the babies and the family dog envision what could be causing all the ruckus: "Sounds like hippos at a hippo hop./ Or when you pick up a piano and you let it drop./ …/ Like London Bridge is falling down!/ Or a couple of … are sitting on a town!" At book's end, when Nora's mother investigates, nothing is amiss. Readers are privy to the joke though, thanks to duPont's cheery slightly stylized artwork featuring muted ochre, pumpkin and melon tones with a bold outline. She shows a grinning Nora in a room filled with toy versions of everything mentioned in the previously imagined scenarios. This bouncy, fun-to-read-aloud outing may well encourage readers to seek out Harper's recording. Ages 3-8.