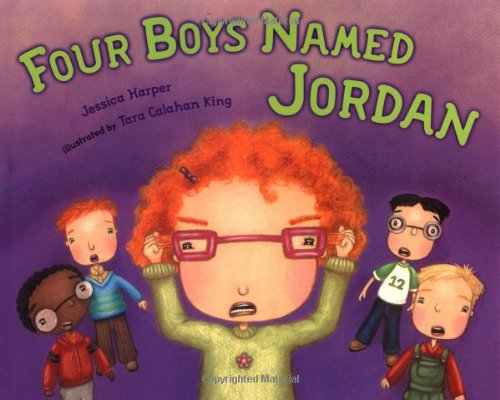 What's in a name? A lot of confusion, according to one third grader who laments the fact that four boys in her class have the moniker. Thus goes the rhyming story in Harper's ( latest children's song-turned-picture-book. When four boys simultaneously respond to the teacher's roll call, a classmate's greeting, or a request to pass the scissors during art, Elizabeth finds the situation exasperating. "Here a Jordan, there a Jordan,/ careful, you might miss one!/ Of all the classrooms here on Earth,/ why did they all pick this one?!" And when a new girl happens on the school scene—also with the name Jordan—Elizabeth comes close to pulling out her curly red hair. Though the text boasts some jaunty rhythms (befitting the tune from which it was adapted), the lines occasionally scan awkwardly on the page. An over-reliance on exclamation points to emphasize Elizabeth's bubbling-up feelings of aggravation also wears thin. (Peter Catalanotto addresses a similar name issue with a light, humorous touch in King ( ) goes to the head of the class with her mixed-media compositions, featuring an energetic spectrum of kids with exaggeratedly wide foreheads and small eyes, many of them brightly bespectacled. Her school-locker endpapers will have readers of a certain age hankering for a hall pass. Ages 4-up.