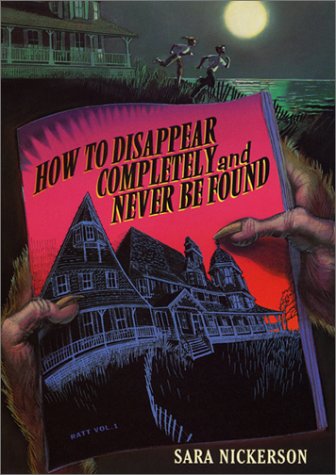 HOW TO DISAPPEAR COMPLETELY AND NEVER BE FOUND

First-time novelist Nickerson follows an arresting first paragraph with an ambitious but somewhat overengineered tale. Margaret's family has unraveled in the four years since her father's death—her mother barely speaks, Margaret is such an outcast at school that she eats lunch in a bathroom stall and her bouncy little sister is obsessed with jigsaw puzzles. When her mother inexplicably drives them to an island and sets up a For Sale sign outside a derelict mansion, Margaret finds a package inside containing a strange comic book, her father's swimming medal and a rusty key. Why did her father drown if he was a champion swimmer? Who is the comic's author, Ratt, and what about the Drowning Ghost who features so largely in his book? Eventually, at the urging of her sole friend, Tina Louise (who all but disappears in the book's second half), Margaret runs away to the island to find answers. Together with Boyd, a lonely boy who lives next door to the mansion and is a Ratt fan (the comics appear regularly on the doorstep of the island's singularly odd library), she solves the multiple mysteries in a somewhat melodramatic climax. Juggling comic strip panels, multiple viewpoints and arch "editor's notes," Nickerson sets up a complex framework that at times works to the story's advantage by adding tension, but often simply overwhelms it. If the structure is unwieldy, the prose stays compelling throughout—the sign of a writer with promise. Ages 10-up.