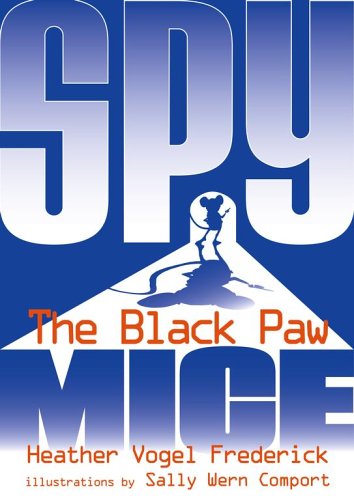 Launching the paper-over-board Spy Mice series, Frederick's ( ) capricious caper stars a spunky mouse who rides a skateboard fashioned from a Popsicle stick and a plump, insecure boy whose hero is James Bond. Glory, a field agent for the Spy Mice Agency, works at headquarters located behind-the-scenes in Washington, D.C.'s International Spy Museum. Fifth-grader Oz's father runs the museum's café. After a chance encounter there, the two share their respective dilemmas. Glory has found in her mailbox the "Black Paw," a symbol that she is marked for death by Roquefort Dupont, leader of the rat underworld whom Glory believes has assassinated her father. Oz dreads the museum's upcoming Halloween masquerade ball, where he fears he will be humiliated by two bullies at school. When Kiss of Death, a pistol from the museum that Glory is on a mission to deliver, winds up in Dupont's hands, Oz and his female friend, D.B., help Glory sneak into the rat's lair to retrieve the weapon. The author keeps more surprises in store, and in the zany finale, the kids and Glory team up to foil Dupont's plan to eradicate the mice—and they also make a laughing stock of Oz's tormentors. Frederick fills this farfetched yarn with engaging banter and entertaining particulars about the Spy Mice's inventive modus operandi. Comport's full-page half-tone illustrations bring the characters and dramatic moments to life. This tale of tails will especially tickle aspiring sleuths. Ages 8-11.