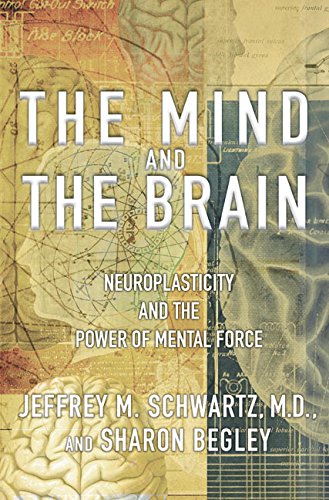 THE MIND AND THE BRAIN: Neuroplasticity and the Power of Mental Force

Schwartz (), a UCLA psychiatrist and expert on treating patients with obsessive compulsive disorder (OCD), teams up with Begley, a science columnist, to explore the mind/brain dichotomy and to discuss the science behind new treatments being developed for a host of brain dysfunctions. Building on the work presented in Schwartz's first book, , the authors begin by demonstrating that OCD patients are capable of rechanneling compulsive urges into more socially acceptable activities and that, by doing so, they actually alter their brains' neuronal circuitry. By presenting a wide array of animal and human experiments, Schwartz and Begley show that similar neuroplasticity is possible in stroke victims, often leading to a return of function previously thought impossible. The medical results and treatments they summarize are exciting and deserve widespread attention. In a chapter entitled "Free Will and Free Won't," the authors turn to the philosophical, examining the implications neuroplasticity might have on the differences between mind and brain; they also discourse on the existence of free will. Unfortunately, their integration of quantum mechanics and Buddhism into a search for a mechanism to explain the patterns scientists have been discovering is too superficial to fully engage readers. Nonetheless, a great deal in this book is sure to motivate discussion and more research.