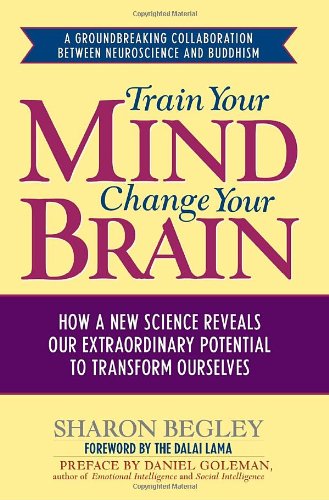 Train Your Mind, Change Your Brain: How a New Science Reveals Our Extraordinary Potential to Transform Ourselves

The Dalai Lama, Buddhist monks and some of the world's leading neuroscientists all gather once a year at a conference on the latest discoveries in neuroplasticity: the study of how the human brain can change itself. (This is the second book the subject due out in March, along with Norman Doidge's ). This remarkable conference serves as the center of science columnist Begley's account of neuroplasticity. Until recently, the reigning theory was that neurons in the brain didn't regenerate. Begley walks readers through the seminal experiments showing that in fact new neurons are created in the brain every day, even in people in their 70s. With frequent tangents into Buddhist philosophy, Begley surveys current knowledge of neuroplasticity. Most interesting is a series of experiments with Buddhist adepts who have spent over 10,000 hours meditating. What these experiments show is tantalizing: it might be possible to train the brain to be better at feeling certain emotions, such as compassion. No less interesting are the hurdles the scientists face in recruiting participants; yogis replied that if these scientists wanted to understand meditation, they should meditate. Despite the title, the book holds no neuroplasticity tips, but it is a fascinating exploration of the ways the mind can change the brain.

The title of Heather Ewing's biography of James Smithson is (Reviews, Jan. 1).