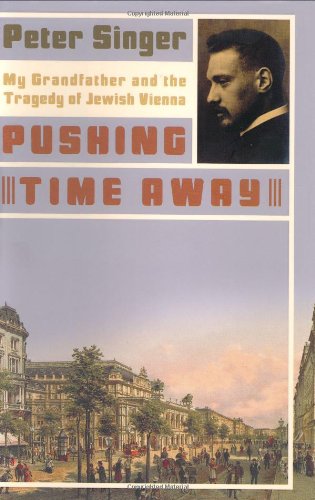 PUSHING TIME AWAY: My Grandfather and the Tragedy of Jewish Vienna

The renowned and controversial Princeton philosopher Singer (a leading proponent of animal rights) presents here a portrait of his grandfather, David Oppenheim, an accomplished classicist, occasional collaborator with Freud and long-standing participant in Viennese psychoanalytic circles. In an aunt's attic in Melbourne, Singer found a trove of letters from Oppenheim to Singer's grandmother Amalie Pollak, and then went searching for additional documentation in the Austrian archives and for his grandfather's surviving students. After a slow start, the result is an altogether engrossing, multilevel journey. Singer richly recaptures the sparkling intellectual and social life, and the ultimate tragedy, of Viennese Jews. He also uses the history to reflect upon his own philosophical commitments, which he does always with an appropriately light touch, complementing, never overshadowing, the drama of his grandparents' story. The homoerotic relations that both his grandfather and grandmother pursued become an occasion for Singer to ponder the ancient world's tolerance of sexual diversity. Oppenheim's letters and other documentation provide a fascinating, insider's view of Freud's circle in the early years of psychoanalytical theory. Freud's tyrannical treatment of those with differing viewpoints, including Oppenheim, leads Singer to reflect upon the meaning of free intellectual inquiry. The last chapters are riveting and sad—Austria's Anschluss with Nazi Germany in 1938, the illusion that life can somehow go on, the departure of the children to Australia, the desperate efforts from faraway Melbourne to wrench the parents from a world collapsing upon them. Written with intellectual breadth and accessible prose, Singer's book could find a wide readership.