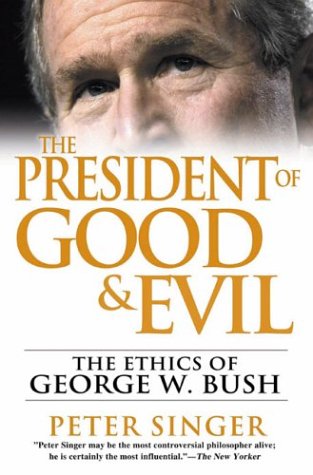 THE PRESIDENT OF GOOD AND EVIL: The Ethics of George W. Bush

This book by controversial ethicist Singer (a founder of the animal rights movement) is both broader and narrower than it purports to be. It offers a look at almost every significant policy the administration has taken a position on yet offers little in the way of new philosophic inquiry. Singer pits Bush's rhetoric and prescriptions against his actions, going from the topical (terror detainees, the war in Iraq) to the abstract (utilitarian theories of government). Singer's arguments are often reasonable and well documented: he asks whether an administration that emphasizes smaller government should be intervening in state right-to-die cases and whether someone so vocal about the value of individual merit should be rewarding birthright by eliminating the estate tax. But anyone who has followed recent critiques of the administration would learn nothing new from these familiar arguments and conclusions, such as that the justification for the Iraq war might have been problematic. Singer's logic can also be mushy. A chapter that decries the influence of religion on Bush's policy dissolves into vague, emotional language better suited to a TV pundit than a philosopher. Singer's most intellectually adventurous chapter involves stem-cell research, where the author exposes fissures in Bush's "compromise" to allow research on existing stem-cell lines. But mostly Singer's critique does little to distinguish itself from other anti-Bush books.