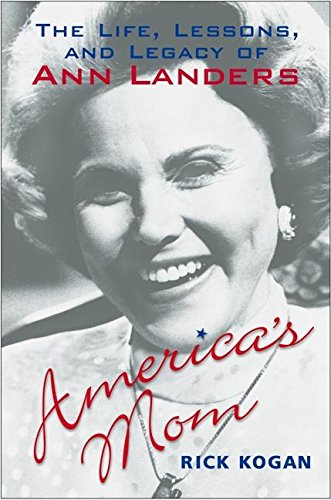 AMERICA'S MOM: The Life, Lessons, and Legacy of Ann Landers

Radio host and columnist at the , Kogan combines anecdotes, heart-wrenching tributes and extensive research with his own experiences as a friend and editor to reveal the true woman behind beloved advice columnist, Ann Landers (1918–2002). Often credited with giving birth to the self-help revolution, Esther Pauline Friedman, known as "Eppie," began her career at the in 1955, with no prior writing experience, but with a snappy, direct style and "an uncanny ability to tap into the American psyche" that quickly led to syndication and millions of daily readers. While clearly an admirer, Kogan (who was Landers's last editor) doesn't fail to delve into Landers's less than flattering public feuds with her twin sister (competing advice columnist "Dear Abby"), the breakup of her marriage due to her husband's adultery, or potholes in her nearly 50-year career, including the potentially devastating accusations that she recycled letters in her column. Most insightful though, are the author's personal reminiscences of Landers as an open-minded, feisty, meticulously dolled-up art lover and loyal friend, unafraid to change her stance on controversial subjects as times changed. To many, even after death, she is still a "mirror" and the "voice of a social culture."

A Life In Letters: Ann Landers' Letters to Her Only Child