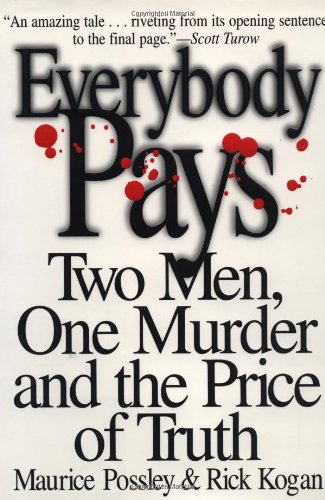 EVERYBODY PAYS: Two Men, One Murder and the Price of Truth

This meat-and-potatoes tale of murder, memory and the Mafia explores facets of Chicago that tourists never see as it delves into a case in which a man is tried twice for the same crime. Veteran journalists Possley and Kogan focus on two lives that collided in 1972: Bob Lowe went out to walk his dog and, on the way, witnessed Harry Aleman execute Lowe's neighbor, Billy Logan. Lowe was a quick-tempered blue-collar father; Aleman an ambitious hit man for the Chicago "Outfit" (and nephew of its then-chief, Joseph Ferriola). Aleman was getting back at Logan for harassing his ex-wife, Aleman's cousin, regarding their children. Lowe picked out Aleman's mug shot, but the cops "lost" his ID. Four years later, with local law enforcement embarrassed by a spate of two dozen unsolved Mafia murders, a state's attorney task force indicted Aleman for Logan's murder. Against his father's advice, Lowe testified, only to see Aleman acquitted in a bench trial. This unmoored the already unsteady and disillusioned Lowe; he drifted into substance abuse and petty crime, which resulted in two years in prison. Lowe eventually dried out and reunited with his family, and was jolted when in 1993 he was once again called upon to testify against Aleman, after revelations surfaced about the earlier trial (mobsters paid the judge a $10,000 bribe). Aleman was sentenced in 1997 to 100 years, despite entreaties by family and neighbors, who called Aleman (believed responsible for numerous hits) "a good man... a wonderful, wonderful dear friend." Possley and Kogan's assured, workmanlike narrative offers a dark portrait of how the discretion of Chicago's organized criminals had resulted, by the 1990s, in long-term corruption of police and judges, and many unsolved gangland slayings. This is a thought-provoking tale of urban malfeasance and delayed justice.