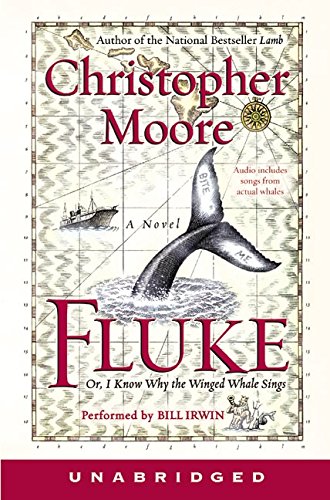 FLUKE: Or, I Know Why the Winged Whale Sings

From Jonah to Pinocchio, men have dreamed of stowing away alive in the bellies of whales. Nate Quinn experiences this doubtful honor in Moore's outrageous new novel (after ). Nate studies whales, operating a small research unit in Lahaina in Maui along with Clay Demodocus, a famous undersea photographer, and two seasonal hires: Amy Earheart, supposedly a grad student from Woods Hole Institute, and Kona, a dreadlocked Hawaiian stoner. When Nate spots a humpback whale with "Bite Me" tattooed on a tail fluke, mysterious disasters start to strike. Then Nate, out with Amy, is swallowed by the tattooed humpback. Technically, this is impossible, nature having created narrow throats for humpback whales, but the tattooed one is a living ship, a simulacrum of a humpback run by a crew of humans and "whaley boys"—human/ whale cross breeds. Nate learns that they were designed by the Goo. (The Goo is a giant, intelligent organism that evolved undersea billions of years ago and has lately been spying on humans with fleets of false whales.) The whale ships dock in Gooville, an underwater city populated by supposedly drowned humans and horny whaley boys on shore leave. The place is run by the "Colonel," Nate's old teacher, "Growl" Ryder. Nate runs into Amy and helps foil the Colonel's mad plan to destroy the Goo. Meanwhile, Clay and Kona plan to come to Nate's rescue. Moore is endlessly inventive in his description of the rubbery, watery world of Goo, and his characters are perfectly calibrated, part credible human beings and part clever caricatures. This cetacean picaresque is no fluke—it is a sure winner.