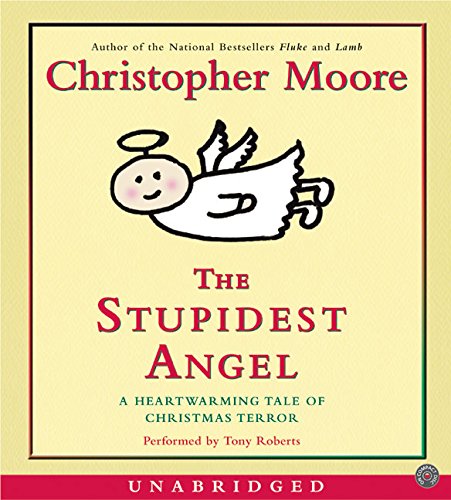 THE STUPIDEST ANGEL: A Heartwarming Tale of Christmas Terror

This audiobook starts off innocently enough—with a few minutes of bright, punchy Christmas music—but as we meet each resident of Pine Cove, Calif., the story bends, becoming as twisted as an image in a funhouse mirror. Lena Marquez is the sanest of the bunch, even if she does have a habit of wreaking violence on her ex-husband, known here as the "Evil Developer." Then there's Lena's best friend Molly, a former B-movie actress who hears voices, occasionally believes herself to be "The Warrior Babe of the Outland" and is married to the town constable, Theo, a former pot addict who's slipping off the wagon. To top that off, there's Tucker, a lonely pilot who has a Micronesian fruit bat for a pet, and a rather witless archangel named Raziel who comes to Earth to grant one boy's Christmas wish. It is that wish which turns this Christmas comedy into a holiday horror story. Roberts narrates the whole affair with skill, using his warm, hearty voice to great effect. His is the kind of voice that one would expect to hear in the audio version of or a children's storybook, which makes him the perfect reader for this book since it is, in part, a parody of the Christmas classics—albeit a gruesomely entertaining one. Whether crooning a few bars of the blues, personifying the dead or delivering one of the story's uplifting messages ("Life is messy. People generally suck"), Roberts's velvet voice rings with mirth, accentuating the humor and absurdity of each moment.