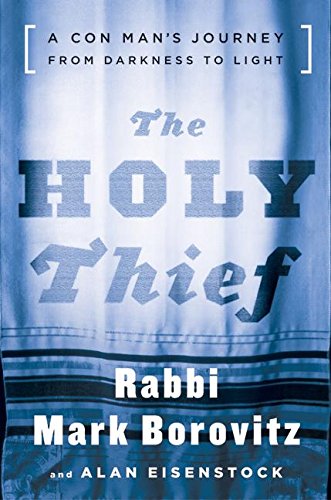 THE HOLY THIEF: A Con Man's Journey from Darkness to Light

Borovitz started with petty thievery—baseball cards, candy, marbles—at age eight. By 14, shortly after the death of his father, he became a middleman, and at 25, he beat two middle-aged men at their own scam. Through most of this he maintained a second life as a nice Jewish boy who went to shul, said kaddish every day for a year for his father, looked out for his sister and turned over much of his ill-gotten gains to his mother to support the family. The scams got bigger, the trail got hotter and eventually he was caught. It took two stints in jail for him to learn that crime doesn't pay, but Borovitz attacked his reformation with the same zeal he once applied to intricate cons. His decision to become a rabbi at age 50 seems nothing less than natural. Borovitz is a storyteller at heart, so it's easy to see how he conned so many for so much. Just as natural is his commitment, with his wife, to , House of Return, a place for souls lost to addiction and themselves. Heart-wrenching but hilarious, raw but refreshing, this everyman tale reminds us that even nice Jewish boys can go bad, but they can also be redeemed.