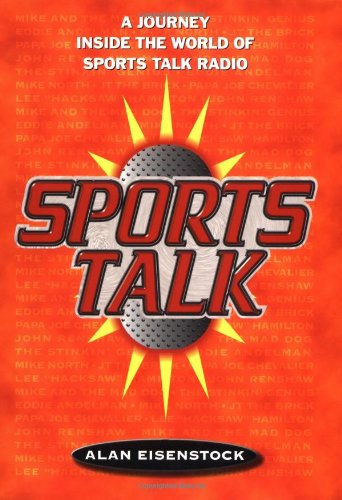 SPORTS TALK: A Fan's Journey to the Heart and Soul of Sports Talk Radio

"Fan" is the operative word in these breezy, inside-the-booth sketches of the reigning personalities in sports radio's huge electronic community. The premise is a sharp elbow to the ribs of Howard Stern and the radio shock-jock industry: compulsive, mostly male listeners put sports talk in first place among moneymaking radio formats (WFAN in New York City is the largest ad-billing station in the entire country). A professional sitcom writer and self-confessed addict of sports radio, Eisenstock here indulges his impulse toward new journalism, never resisting the strong pull of his own attachment to his subjects. With ardor and the occasional grain of salt, he gestures at but never quite reaches the "heart and soul" of the form established by pioneers like Lee "Hacksaw" Hamilton, with his XTRA Sports show on the "Mighty Six-Ninety" in San Diego, the "Stinkin' Genius" and "The Brick." The result is a smoothly written road trip diary to six cities by a guy-culture anthropologist who interviews other guys at a virtual frat party; it yields lots of anecdotes and interesting insider chat, but remains a fan's shapeless, sometimes entertaining tribute. "Mike and the Mad Dog" and a half-dozen other hosts are interesting characters—and the fact that sports radio is the forum for connecting to a larger world for millions of men is real meat for sociologists and business writers—but Eisenstock's loyalties to the ritual bonds afforded by the medium might have been better served by a long article in a sports magazine.