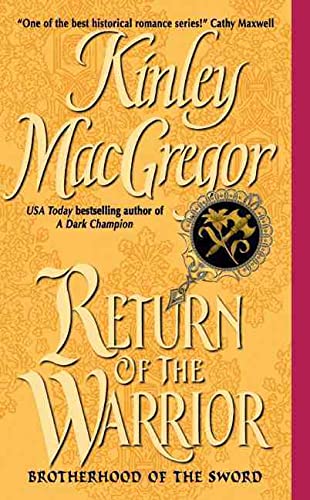 RETURN OF THE WARRIOR

Plenty of passion can't save this weakly plotted second entry in MacGregor's Brotherhood of the Sword series (after ). Queen Adara must find the husband she hasn't seen since they wed as children if she is to save her small kingdom near Byzantium. Unfortunately, Adara's quest reaches an obstacle in Prince Christian himself, who not only has forgotten their marriage but wishes to avoid anything restricting his freedom. Raised in a monastery after the death of his parents and recently released after having spent six years in a squalid prison, Christian wants only to avenge wrongs done to fellow knights who shared his sufferings as a captive of the Saracens. While evidently set during the Crusades, the book has only a perfunctory sense of time and place. The trite, simplistic dialogue ("Fine, Adara. Whenever you decide to grow up and act responsibly, I shall be in our tent") as well as Adara's ability to say good-bye in several anachronistic languages (" ") show that MacGregor, who scored highly with her MacAllister series ( , etc.), has really stumbled here.