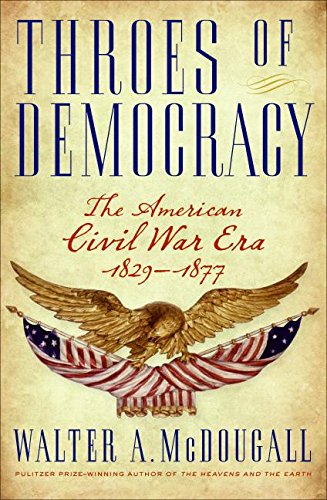 The subtitle’s overextended claim that the Civil War era started in 1829 sets the tone for this hulking second volume (after ) of Pulitzer-winner McDougall’s projected multivolume history of the U.S. The author tries both to deflate national pride and celebrate national progress in the era in which the nation spread across the continent, shattered in a war and came back together. He does so in an opinionated, breezy narrative that focuses on individuals—lesser known as well as famous, writers and thinkers as well as political and military leaders. But McDougall’s history is basically a traditional one about party conflicts, the westward course of empire, war, the Transcendentalists, frontier tensions, railroads, slavery, religious tensions and robber barons. You’d never know that a huge body of history on the real lives of 19th-century Americans had been produced in recent decades. Not many women appear, or Indians, slaves and freedmen, or working people, many of whom helped make the young democracy vital and tumultuous. McDougall’s strength lies in deflating cherished reputations, like de Tocqueville’s, and restoring others’, like pastor and intellectual Orestes Brownson’s. A pleasing romp through a critical period in the nation’s history, it sticks to the tried and true. 19 maps.