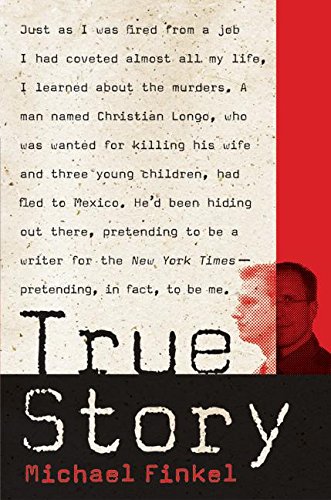 In 2001, Finkel fabricated portions of an article he wrote for the . Caught and fired, he retreated to his Montana home, only to learn that a recently arrested suspected mass murderer had adopted his identity while on the run in Mexico. In this astute and hypnotically absorbing memoir, Finkel recounts his subsequent relationship with the accused, Christian Longo, and recreates not only Longo's crimes and coverups but also his own. In doing so, he offers a startling meditation on truth and deceit and the ease with which we can slip from one to the other. The narrative consists of three expertly interwoven strands. One details the decision by Finkel, under severe pressure, to lie within the article—ironic since the piece aimed to debunk falsehoods about rampant slavery in Africa's chocolate trade—and explores the personal consequences (loss of credibility, ensuing despair) of that decision. The second, longer strand traces Longo's life, marked by incessant lying and petty cheating, and the events leading up to the slayings of his wife and children. The third narrative strand covers Finkel's increasingly involved ties to Longo, as the two share confidences (and also lies of omission and commission) via meetings, phone calls and hundreds of pages of letters, leading up to Longo's trial and a final flurry of deceit by which Longo attempts to offload his guilt. Many will compare this mea culpa to those of Jayson Blair and Stephen Glass, but where those disgraced journalists led readers into halls of mirrors, Finkel's creation is all windows. There are, notably, no excuses offered, only explanations, and there's no fuzzy boundary between truth and deceit: a lie is a lie. Because of Finkel's past transgression, it's understandable that some will question if all that's here is true; only Finkel can know for sure, but there's a burning sincerity (and beautifully modulated writing) on every page, sufficient to convince most that this brilliant blend of true-crime and memoir does live up to its bald title.