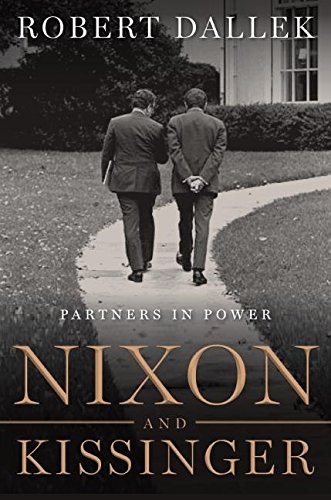 Nixon and Kissinger: Partners in Power

Bestselling author Dallek ( ) delivers what will quickly become recognized as a classic of modern history: the definitive analysis of Richard Nixon and Henry Kissinger's complex, often troubled partnership in running American foreign policy from January 1969 through August 1974. Dallek has had unprecedented access to major new resources, including transcriptions (20,000 pages) of Kissinger's telephone conversations as secretary of state, unreleased audio files of key Nixon telephone conversations and Oval Office discussions, and previously unexamined documents from the archives of Nixon, Kissinger (who served first as national security adviser, then as secretary of state) and White House hands Alexander Haig and H.R. Haldeman.

Dallek's eloquent portrait of power depicts two men who were remarkably alike in important ways. Both harbored ravenous personal ambitions. Both suffered from (and operated out of) profound insecurities and low self-esteem. Both were deeply resentful (to the point of paranoia) of criticisms and challenges. Digging deep into the various archives, Dallek artfully fills in the back stories behind such debacles as the pair's policies in Vietnam, Cambodia and the Middle East, as well as such triumphs as the opening to China.

In what many will consider the book's darkest moment, Dallek reveals for the first time the discussions and strategic thinking that led to the U.S.-orchestrated coup d'état against Chile's democratically elected president Salvador Allende in September of 1973. As he did with his Kennedy biography, Dallek finds important new material that will revise our thinking about a president and the man the author terms "a kind of co-president." 16 pages of b&w photos.