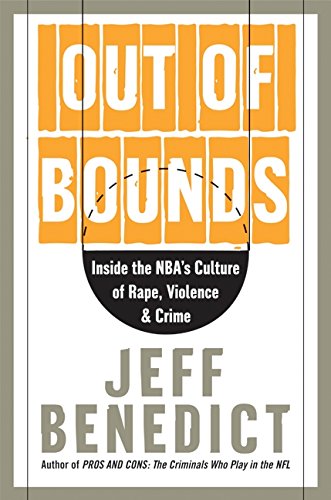 OUT OF BOUNDS: Inside the NBA's Culture of Rape, Violence, and Crime

In what is bound to be one of the more controversial sports books of this year, Benedict ( ) applies his superb investigative reporting skills to the "dark, sinister side" of dozens of NBA players, painstakingly detailing criminal behavior ranging from drug abuse and domestic violence to armed robbery and rape. Using criminal background checks on nearly 200 NBA players; thousands of pages of trial transcripts and other legal documents; and more than 400 interviews with police officers, attorneys, players, victims and witnesses, Benedict tells hard stories, some well known and others discussed in depth for the first time here. Benedict also has no fear of naming some big names—including all-stars Patrick Ewing, Gary Payton, Glenn Robinson and Damon Stoudamire—to detail what he calls "the rash of lawlessness that is currently gripping the NBA." Benedict exposes how life as a touring player in the NBA offers vast amounts of free time and sex, encouraging criminal behavior and leading to a warped perception of women and their availability, as well as producing an environment "hot-wired" to produce incidents of sexual assault. He explains how the "see-no-evil approach" of NBA teams and their armies of lawyers fosters the perception in players that they are above the law, leading to outrageous behavior toward law-enforcement officials. As well, he explores the role that agents play in keeping criminally accused players from accountability. This is an excellent book that proves its point that life in the NBA is "out of control and absolutely demands close scrutiny."